This article gives an overview of how a hackathon team at RIVIGO made AI based Conversational CRM Agents, to enable hyper-growth and infinite scalability in connecting with customers while reducing manual interventions.

Rivigo Freight is a technology-enabled logistics marketplace that connects shippers to carriers. Around a hundred thousand shippers and two lakh carriers have already been on-boarded into the system in 18 months and these numbers are increasing exponentially. To help shippers post loads (the requirement for material transfer), n number of calls are made every day by our calling agents to shippers.  This approach has multiple limitations due to which we are unable to serve all the loads. As part of the Rivigo Hackathon, we attempted to solve this problem by making AI based Conversational CRM Agents. This would enable hyper-growth and infinite scalability for Rivigo and the Indian Logistics Industry.

In the life cycle of a load, multiple calls are made by CRM agents for the fulfillment of a trip, like calls for load confirmation, load hunting calls, price negotiation, etc. Since most of the loads are received during peak market hours, calling all the potential stakeholders isn’t humanly possible leading to delay and a possible loss of opportunity. An AI-based CRM Agent helps us to make any number of calls at a single instance enabling infinite scalability. 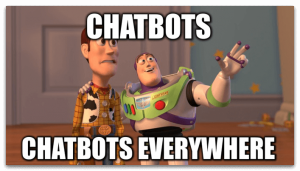 We picked the task of making an interactive AI Based CRM Agent as a part of the RIVIGO hackathon. We started by making an architecture diagram for the product and creating an MVP to do a feasibility check.

Twilio is a cloud communications platform as a service company that allows software developers to programmatically make and receive phone calls, send and receive text messages.

Converting speech to text to understand and generate a response. We used Google Voice detection API for hackathon purpose. This accuracy needs to be improved by training with multiple data points, accents, dialects.

Dialogflow (formerly Api.ai, Speaktoit) is a Google-owned developer of human-computer interaction technologies based on natural language conversations. This tool is used in understanding the context, intents, and entities from the text and in generating the appropriate response.

Text responses by our actions need to be converted into a speech which is flowed to Twilio. We are currently converting the response generated from Dialogflow to speech in various languages using Google TTS API.

Detect the language and preferability of the user using his location, past conversations thus making the conversations more interactive. This can be further enhanced with sentiment analysis and contextual responses.

Fetches information about users, their relevant loads, prices, etc. Besides that, it also provides interfaces for actions like posting loads, quoting price for a particular route, etc. 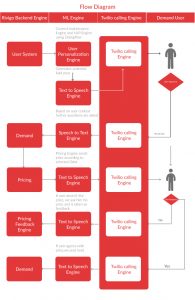 We have currently deployed this for a use-case of calling demand users for increasing loads. We are using AWS stack for the deployment.

Check out the demo below:

Besides this, we can integrate the chatbot with Rivigo Android Apps, Amazon Alexa, and Google Home.

Currently, we have only developed the CRM AI Agent for English languages. In the future, we want to extend it to Indian languages like Hindi, Tamil, Telugu, etc. Speech to Text current accuracy isn’t great since Google’s model is based on native American speakers. We would want to train it using Indian native speaker’s data and make the voice more humane.

Manish Agrawal, Vinod Reddy and Amaresh Kumar have also contributed to this article.

Tushar is working as a Data Scientist in RIVIGO's Data Science team. He is passionate about designing solutions for previously unsolvable and high business impact problems. He also puts a keen emphasis on setting up the right architecture and writing highly maintainable code.

Our overall approach and architecture of the Freight Pricing Engine, which has been conceptualized to make the process of price discovery in the trucking marketplace hassle-free and transparent.